Dramatic Dream Team’s Yuki Ueno and Naomi Yoshimura are leading the charge in the battle for DDT supremacy at CyberFight Festival. This DDT Pro eight-person match will feature some of the biggest names and most wildly popular wrestlers on the company’s roster. With a mixture of power, speed, high-flying acumen, and great senses of humor, could this match be the sleeper hit of the entire event? 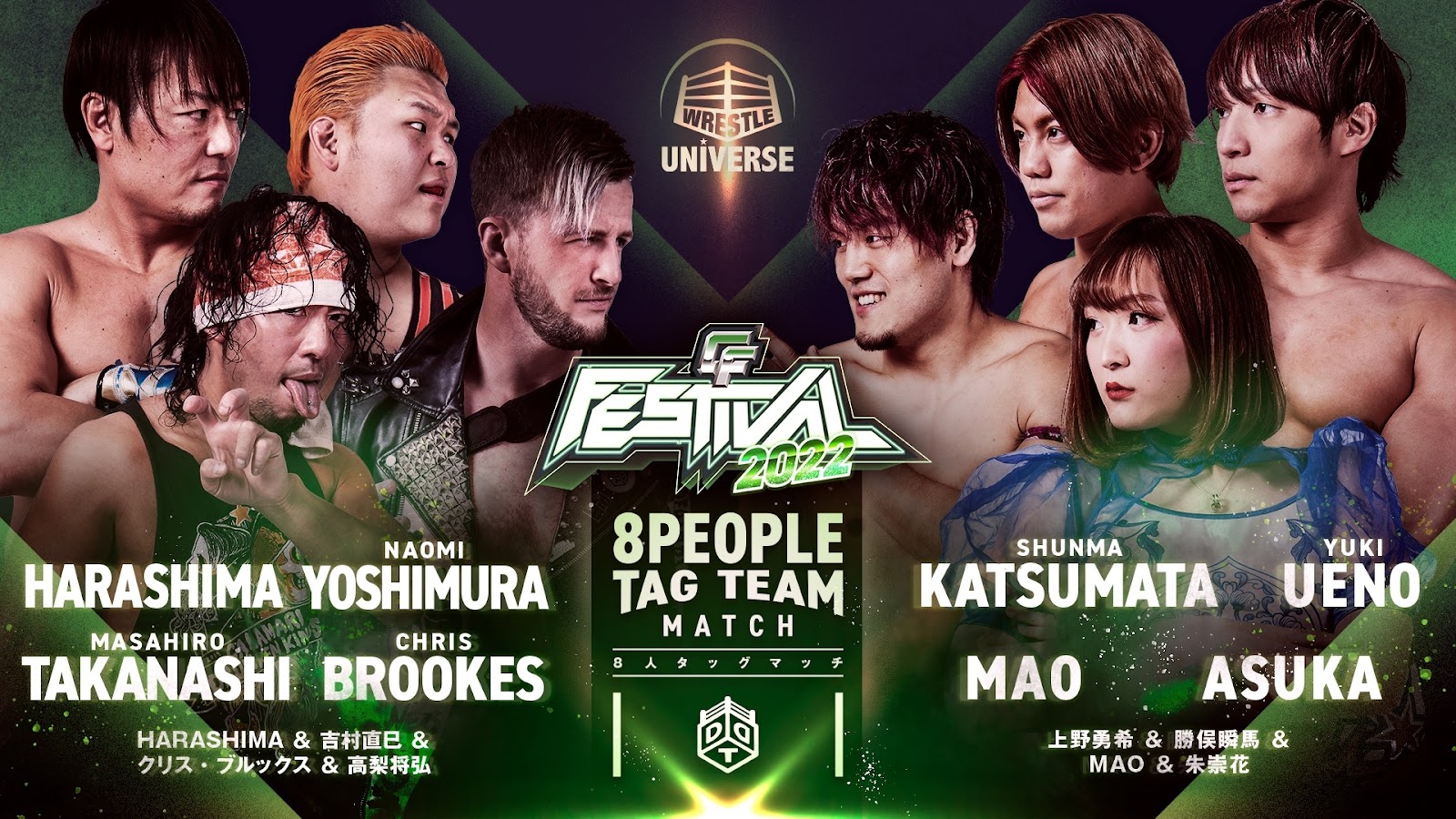 Yoshimura teams with HARASHIMA, Masahiro Takanashi, and Chris Brookes, while Ueno tags with MAO, ASUKA, and Shunma Katsumata. With a representative from each side present, get ready to learn more about DDT as the only thing they both agree on — is how much many people are underestimating DDT.

Karen Peterson: Many PWI readers are still learning about DDT. Please start with a short self-introduction.

Yuki Ueno: I’m Yuki Ueno. I’m in a faction named The 37 KAMIINA alongside Konosuke Takeshita [currently on an international excursion in AEW], Shunma Katsumata, MAO, and Toui Kojima. We’re the hottest, trendiest, and most fun group in all of Japan! DDT is the best wrestling company in the world, because it’s a treasure chest of powerful and entertaining wrestling!

Peterson: What does CyberFight Festival mean to you? What are your feelings about this big annual show with all your sibling promotions?

Ueno: This is a solid opportunity to show people the heart of DDT. Many say that [DDT] is child’s play and a goofy circus, but I think that is due to a lack of knowledge of the [depth and ability of those] of our company. It isn’t about comparing DDT to other promotions, but about the individuality of DDT. The challenge about every promotion coming together in an event like this is finding balance—because there are clashes of pride. The key aspect is making the climb and elevating the entire company together, not tearing one another down. This once-a-year event really lights the fire under all of us in CyberFight.

Yoshimura: CyberFight Festival is our once-a-year celebration where all four companies—DDT, Tokyo Joshi Pro-Wrestling, Ganbare ☆ Pro-Wrestling, [and NOAH]—come together as one. Honestly, I cannot wait! Personally, I think DDT is the most interesting of the four. When it comes to levels of entertainment, strength, fun, and awe, DDT is consistently at the top in all of these categories. I want to show that to our audience!

Peterson: What are you most looking forward to with your match at CFF ’22? Which match (that isn’t your own) are you most excited to watch?

Ueno: This match is a collection of wrestlers who work exceptionally hard and compete against one another on a regular basis. Everyone is very familiar with each other’s moves, and we’re prepared to take everyone to another level with our performance in this huge match. As our match is solely DDT wrestlers, we can truly highlight the very best of DDT and prove who is the cream of the crop in our company. I can guarantee you’re going to want to keep your eyes on everyone in this match because everyone wants to win. The other match I am looking forward to is (Toui) Kojima’s because he’s the last member of 37KAMIINA*. I have high expectations for Kojima, especially after the way he showed his resolve at the press conference. I believe that with a strong frame of mind, one bolsters their physical performance, so I want him to keep that in mind during their fight. I want to see [Kojima and Koroku] show the world what they are made of!”

Yoshimura: Both HARASHIMA and Takanashi are veteran wrestlers in DDT. And, paired with Chris (Brookes) and myself, we’re four guys who joined DDT with great respect for the company. We’re teaming up to face The 37 KAMIINA’s Ueno, (Shunma) Katsumata, and MAO—three guys who represent present-day DDT—plus VENY (ASUKA), who is active all over the world. I believe our match at CyberFight Festival is the best way to truly experience what DDT has to offer. We will showcase the wide range of wrestling in DDT. It will be bright, fun, fierce, and hard-hitting, too! The three matches [on my radar] are Kenoh vs. Daisuke Sasaki, DDT (Endo, Akiyama, & Higuchi) versus NOAH (Nakajima, Kotoge, & Inamura), and Okada & Fujimura (NOAH) versus Kojima & Koroku (DDT).

Peterson: After CFF, what are your goals for the rest of the summer?”

Ueno: I want to win the KO-D (King Of DDT) Tournament and become the strongest in all of DDT. After which, I’d like to challenge for the KO-D openweight championship. I think the greatest obstacle, though, is my physical strength. Winning such a challenging tournament would be a great way to prove to everyone how much I’ve grown.”

Yoshimura: After CyberFight Festival concludes, the next big thing is the start of The King of DDT. I’ve had some success as a tag team wrestler, but I have yet to break through as a singles wrestler. So, this year, I’m going to do my best to win. We also have Wrestle Peter Pan on August 20, which is one of our biggest events, so I want to focus my attention there, too.

Ueno: Honestly, I don’t have a strong desire. I developed as a wrestler in DDT, and I want to become the top, so that is where my focus is currently. I am willing to do whatever it takes to make DDT a household name and throw all my energy into making this a reality. One day, I would like to face HUB [veteran Japanese freelancer]. He’s the wrestler I’ve aspired to be most like. I find him to be the ultimate in strength and coolness factor!

Yoshimura: I’ve had matches in L.A., Ohio, Chile, Canada, and South Korea. There’s a creative and interesting approach to wrestling abroad. I would love to revisit matches with previous opponents, and also invite them to come and wrestle in Japan. If I am looking at domestic opponents, the one who stands out in my mind is my mentor, Zeus [formerly of All Japan, now president of Osaka Pro Wrestling].

Do you have any special messages you’d like to send to the international fans?

Ueno: DDT’s greatest power is our strength and ability to truly have fun! I hope more people will take notice of DDT and me! I hope you’ll support us, too!

Yoshimura: I want to showcase all the fun we have in DDT—not just within Japan, but I want it to reach everyone all over the world. We have so many wonderful wrestlers in DDT. Just give us one try and find out for yourself!